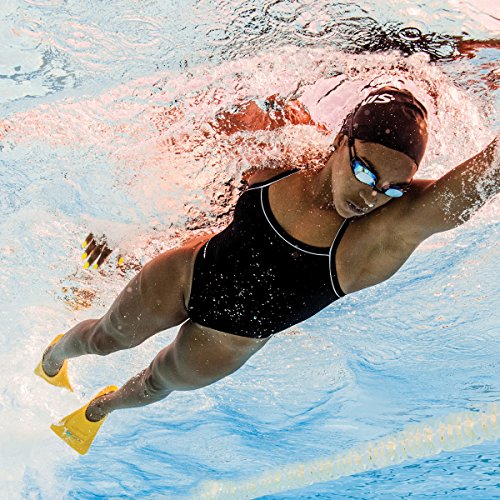 The introduction and constant advancement of sports gear used in competitions is a subject of much debate. For instance, Nike has had some of their shoes banned from competitions by World Athletics, running’s governing body, because it gave runners wearing them an unfair advantage.

World Athletics had to alter the rules such that Nike’s Alphafly and Vaporfly shoes were prohibited from running competitions unless they were redesigned. This ruling begs the question: if certain gear could give athletes an unfair advantage, which is referred to as technological doping, then where do we draw the line?

Now when it comes to swimming, the rules are more clear-cut as of now. With regards to athletes wearing swim fins, the rules clearly state that any device “that may aid his speed, buoyancy or endurance during a competition (such as webbed gloves, flippers, fins, power bands or adhesive substances, etc.)” is not permitted, so there is no gray area there.

Since competitive swim meets do not allow swim fins to be worn, wearing them during a meet would be considered cheating. However, there’s nothing wrong with wearing swim fins during training to help you improve your technique and stamina in preparation for swim meets. That said, you could be cheating yourself out of good training if you’re using the fins improperly.

Perhaps one day there will be innovations in swim caps, swimsuits, and swim goggles that may make swimming’s governing body rule against even those pieces of gear, but for now those are the only acceptable swimming gear for swim meets.

With that answered, you might still have some burning questions, such as: what are the benefits of training with swim fins? Do swim fins make swimming easier? Can you wear swim fins in a public pool? Is it cheating to train with swim fins? Keep reading on to learn the answers to all of these questions.

Do swimmers train with fins? 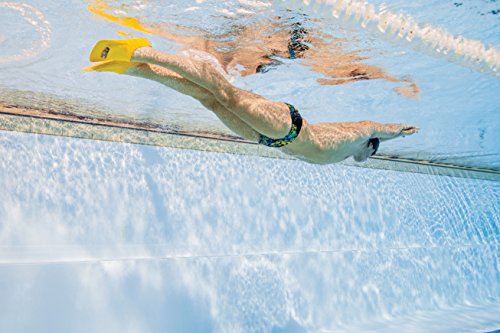 Yes, absolutely, swimmers find fins to be an excellent training aid. The extra force required to kick with fins on helps train your ankle flexibility, endurance, and strength to overcome the extra water resistance.

Training your ankles can help you get a more efficient flutter or butterfly kick. It also benefits kick speed, helps you get used to the up and down motion of the kick, and keeps your hips higher in the water to get a better sense of body positioning.

Of course, fins don’t just train your ankles; it trains the rest of your legs as well. Swimmers have found that it activates and helps develop the muscles used for kicking so that even after taking their fins off, they are still using the appropriate muscles instead of cheating the movement.

Psychologically, new swimmers may enjoy the speed boost that swim fins can give them. It can give them a goal to strive for, and some swimmers say they remember the feel of gliding through the water with fins even after taking them off. They also feel that the exaggerated form and technique they had to adopt for swimming with fins helps improve their technique without fins.

When used with appropriate sets, swimmers find that swim fins provide a great overall workout by strengthening their legs, core, and body position.

Are you cheating yourself by swimming with fins? 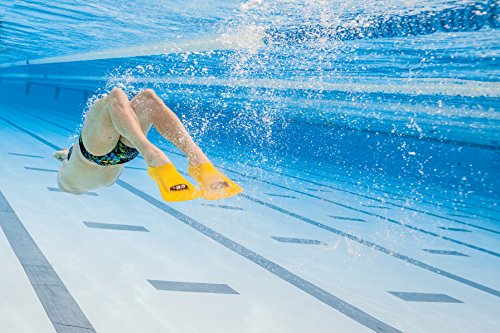 We’ve already discussed how swimming with fins would be considered cheating in a competitive meet. However, there are no rules for how you can train on your own time. Naturally, the question now is: is training with fins cheating yourself?

Swimming with fins makes you faster, but is it also easier? If you’ve ever had the chance to try them on, you’ll know that it doesn’t make it easier. The longer the fin blades are, the more resistance you have to overcome, hence why it is good training.

A useful metaphor is to think of swimming with fins like riding a bike. Bikes have higher gears that make you go faster, but you need to put in more effort for that speed. In that way, you’re not cheating because you still need to put in significant effort, and it is through this effort that your muscles grow and your endurance improves.

With that in mind, swimming with fins is like swimming at a higher gear. You must use your leg muscles to overcome the extra resistance that fins add, and once you remove the fins, you will still feel like your kicks are way more powerful.

An actual example of cheating would be using a sea scooter to propel yourself so you don’t even have to move a muscle. At least with fins, there are legitimate reasons to wear them besides swimming faster.

Don’t think of swim fins as a cheating aid, rather think of them as a training aid. Just don’t wear them during competitions.

Can you wear swim fins in a public pool? 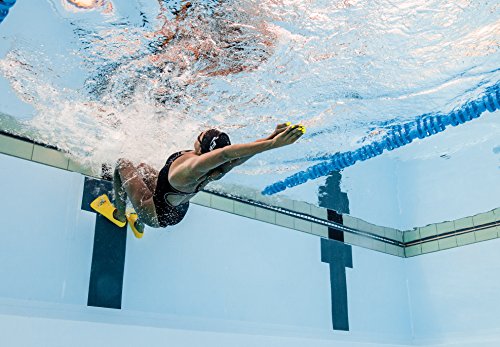 Every swimming pool has their own dress code, but as far as I am aware they generally allow swim fins to be worn. With that said, there may be some unwritten rules that you need to know. Here is some general etiquette to keep in mind.

The first tip is to use swim fins with shorter blades. These fins don’t produce as many waves when you kick so that you are less likely to affect other pool-goers. Short fins also make it less likely that you will accidentally kick somebody or otherwise get in their way with your fins.

The second tip is to not use fins in crowded pools. As mentioned, wearing fins can cause your kicks to create waves. When a pool is small and crowded, your kicking can create a lot of turbulence and splash onto a lot of people.

A small pool also makes swimming with fins ineffective. The goal is to help you train, and for that you need to kick many times. But if the length of the pool is 15 m or less, you could probably cover that distance in a couple of powerful kicks, and you would never get the satisfaction of swimming fast because you reach the end of the lane so quickly.

Are you afraid that training with swim fins is considered cheating? Perhaps you’ve heard of some people ridiculing it, but even competitive swimmers train with fins, so these naysayers have no clue what they are talking about.

With that in mind, there is a wrong way to use swimming fins. If you are not using it as a training aid, but instead use them to swim with lazy legs or to let the fins elevate your legs and hips into the correct position with no effort on your part, then I suppose you are cheating yourself.

If you are wearing swim fins just to try to swim faster than other swimmers in the lane next to you for an ego boost, that doesn’t mean that you made any improvements necessarily.

You need to have the right frame of mind – the desire to improve and learn from your mistakes – so that you can get the greatest benefit out of swimming fins. Otherwise, you’re just wasting your time and possibly even sabotaging yourself by making you think you’re faster than you actually are.