The title of this article may be a bit confusing considering flippers and fins refer to the same thing, but some people categorize them differently. I’ve come across some people who refer to scuba diving fins as “fins”, and swimming or snorkeling fins as “flippers.”

For some people, fins sounds too formal or strong of a word, fit only for instructional use or to describe heavy duty gear, so they prefer to use the word flippers generally. Or perhaps the distinction is made based on blade length, with longer fins referred to as fins and shorter blades flippers. Semantics aside, which fin should you wear for snorkeling?

For snorkeling or swimming purposes, you should specifically wear a snorkeling or swimming fin over a scuba or freediving fin. Snorkeling fins have a shorter blade length, aren’t as stiff, and are much smaller in size. This is ideal because it can still help you generate additional thrust per kick without requiring you to have immensely strong legs, and it makes packing for travel much easier.

In this article, we will discuss the differences between a flipper and a fin, as well as which one you should wear while snorkeling or swimming.

Flippers vs fins: a note on semantics

As mentioned, the words flippers and fins can be used interchangeably when it comes to water sports. Obviously they have a huge difference in the context of animal bone structure (or lack thereof in the fin’s case), but they mean the same thing in the context of flippers (look, I’m already using it interchangeably, though I lean more towards fins).

The thing about language is that it evolves over time. If enough people use a word to mean something that is different from its original definition, it can become the new meaning.

For example, do people even use the word “literally” correctly anymore? It can now mean a word used for emphasis instead of pointing out something being literally true, and even dictionaries have changed to reflect that.

At least for me, I tend to just use the same terminology as the person I am speaking to. If they prefer to say flippers, then I’ll say flippers too just so the conversation doesn’t get derailed. I don’t think it’s worth being a pedant and arguing semantics because I don’t care and, at the end of the day, the community at large uses these two terms interchangeably so they mean the same thing.

I think when people try to differentiate between fins and flippers, what they really want to distinguish between are scuba fins vs snorkeling fins.

The biggest physical differences between these two types of fins are: blade length, stiffness, and heel type (open vs closed), as well as split vs paddle fins. There are also differences in cost, ease of use, convenience packing for travel, and thrust efficiency. 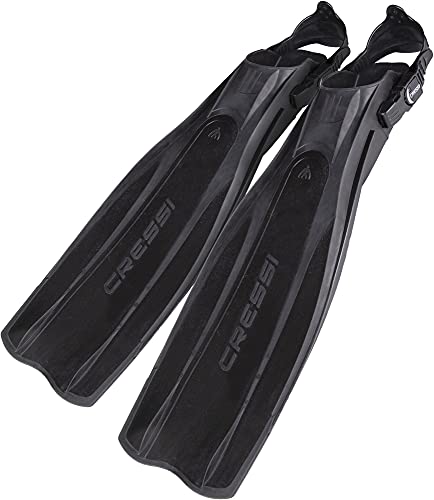 A stiffer blade is necessary for scuba fins because it can help you generate more thrust. Thrust is a force that propels you forward relative to how much backward force your kicks generate. Since longer and stiffer fins require more force to kick with, the thrust generated is significantly greater than shorter and softer blades.

Since scuba divers carry a lot of heavy and bulky equipment, scuba fins must generate enough thrust to move all of that extra weight, hence why they are designed the way they are. Naturally, this also means you need very powerful leg muscles to even perform a kick with scuba fins and a bunch of scuba equipment on.

Scuba fins tend to have an open heel design so that you can also wear them with dive booties. If you need to walk to your dive site, wearing booties will make the trek a lot more forgiving on your feet if there are rocks or other rough terrain along the way.

When it comes to travel, the long fins are a pain to pack because at 30 inches in length, it doesn’t fit in most travel bags or backpacks and you need a longer, dedicated bag just for your scuba fins. 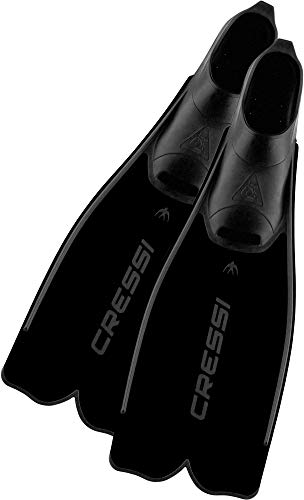 Snorkeling fins are shorter and less stiff than scuba fins. They tend to be around 20-25 inches in length which makes them easier to kick with and pack into a bag.

Knowing what we know about how thrust is generated, a shorter and softer blade naturally produces much less thrust. You do not need to have powerful leg muscles to perform a kick, but it will still be a bit harder to do compared to kicking without fins.

Each kick with snorkeling fins on will not propel you as far compared to a scuba fin, but you can do many more of them over the same span of time, and it may even be less tiring if your leg muscles are specialized for endurance over strength.

Which one should you wear for snorkeling? Not to be facetious, but probably snorkeling fins. You can technically wear whatever you want; there won’t be some ocean police coming to ticket you for wearing the “wrong” fins. Both fin types are good at what they do, but snorkeling fins are much better suited for snorkeling for the following reasons.

Shorter fins allow you to basically kick the same way you used to and gives you a feeling of speed without needing to increase your leg strength.

When snorkeling, you tend to do it at shallow depths which means you’re a lot closer to corals and the ocean floor. It is much easier for you to make more precise movements with snorkeling fins so that you don’t kick coral or cause a silt out.

Do you need to wear flippers while snorkeling? No, you don’t need to wear flippers but they are nice to have. Flippers essentially make each of your kicks more efficient for the amount of energy you spend. You can move through water faster but also for longer periods of time. Flippers are also slightly buoyant so they help your legs stay afloat.

The increased propulsion and stability that snorkeling fins add can help you snorkel further out to better sites and help you stay floating in a horizontal position without wasting energy.

These benefits are also great safety features. Since you can stay afloat more easily, you waste less energy trying to stay afloat. If the currents start to pick up and pull you away from shore, with fins on, you are more capable of swimming out of currents with your enhanced kicking power.

Fins also provide limited superficial protection for your feet. It’s much better if your fins hit coral rather than your bare feet. Any scratches, cuts, or stings that might have occurred on your feet may be blocked by the flippers, though it could just as easily slice through it.

When it comes to fins or flippers for snorkeling, the answer is that it’s a good idea to wear some kind of speed and buoyancy aid and fins/flippers fulfill this role nicely. They can make your snorkeling experience more enjoyable by allowing you to generate more thrust with each kick and improve your swimming velocity.

If the best views are a fair distance out, with your trusty flippers, you can easily swim that distance and back without worrying about fatigue. If the currents are strong, you can even overcome them with snorkeling fins on.

They are also a great tool for training since they can develop your ankle flexibility and leg muscles. There is little reason not to wear snorkeling fins or flippers, so it is highly recommended that you do.